Pacific Fighters was founded on tax day April 15th, 1987 in Chino, California. Some of our very first projects were the restoration of a P-63 King Cobra and the restoration of a T-20 Sea Fury that became the famous “Cotton Mouth”. This particular Sea Fury was the very first to be fitted with the Wright Cyclone R-3350. Its massive amount of horsepower and highly polished finish became a fan favorite at the Reno National Air Races, in Reno NV. Pacific Fighters relocated to Idaho Falls, ID in 1996 and moved into a 10,000 square foot hangar built with restoring these iconic aircraft in mind. Together with our exceptional crew we’ve received more than 25 awards and have won the NAHI Smithsonian Institute Invitational Grand champion award twice. We have worked with customers from all over the world and have worked on over 50 different types of vintage aircraft. 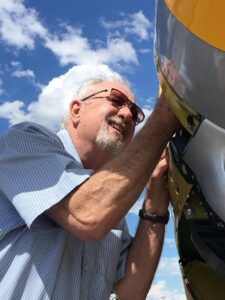 John grew up in Rialto, CA. At the Age of 14 John and his older brother Bill started going to Ontario Airport to volunteer at the Air Museum, which later became Planes of Fame Air Museum. It was there that John and Bill met Jim Maloney and Steve Hinton and the well know “Chino Kids” were formed. John did everything he could to be around airplanes. A burning passion for aviation that may have came from his Grandfather who was a World War I Fighter Pilot. At the age of 18 John received his PPL and by the age of 22 was flying P-51 Mustangs. In 1975 John joined Ed Browning’s Red Baron Racing Team and moved up to Idaho Falls, ID to work on the Famous RB-51. John would eventually become one of only four people to ever fly the highly modified racer. After the closing of the team John went back to California and met his wife Karen. John has experience flying some of the rarest aircraft around. A few of note are: The RB-51, Mitsubishi Zero, P-38 Lightening, The Grumman Cat series, The Super Corsair, Seversky AT-12, and too many others to mention. John is also one of just a handful of people that has flown the 5 main models of the P-51. The P-51 A, B, C, D, and K. John has also flown in major motion pictures and is one of just 240 people to ever Race Unlimited’s at the prestigious Reno Air Races in Reno, NV. His passion for aviation and love for restoration is why he started Pacific Fighters.

John started out life in sunny Chino, California. Riding his bike on the ramp and building model airplanes. It’s not very surprising he’d fall in love with aviation at an early age. At the age of 10 the Muszala family relocated to Idaho Falls, ID. By the age of 17 John was learning to fly in a Cessna 140. His first solo flight was accompanied by two USAF C-130s training at KIDA. John sitting at the end in his little 140 with two giant C-130s right behind him on the taxiway. No pressure for a first solo flight. By the age of 19 John was checked out in the AT-6 and by 22 he soloed the P-51 Mustang for the first time. He also completed his A&P license that same year. By the age of 23 John was flying the A1E Skyraider out of Gillespie Field, CA. preforming in airshows and private events up and down the California coast. John’s goal was to learn from others. He spent a lot of time away from home learning from experts, this has been instrumental in his life and education. John is now an accomplished commercial pilot and has flown many different types of historic aircraft. John is also among the handful of people to have flown the P-51 Mustang Series. He like his father competed in the Reno National Air Races in 2017, and is one of the very few pilots to race in the Unlimited Class. His passion for aviation and restoration burns bright.

Jared also started life in sunny Chino, California. Not as keen into aviation at an early age. Jared enjoyed more artistic things than giant loud engines. But by the age of 16 he looked at his mom and said, “ Mom I’m sorry to disappoint you but I think I love aviation”. Jared went on to complete his A&P License, is a student pilot and artist with a passion for historically accurate details. Jared is a big part of why “Berlin Express”, was awarded the Most Authentic Award and went on to become one of the most award winning restorations to date. His passion for aviation and his eye for detail have helped elevate Pacific Fighters Restorations. Jared has many passions out side of aviation. One of his favorite pass times is creating colored pencil scenes and airbrush art.